Today is huge day for Skydio. Today, we are celebrating the release of Skydio 3D Scan™, our revolutionary adaptive scanning software that enables Skydio drones to fully automate the entire data capture process needed to document the most complex structures and generate 3D models with comprehensive coverage and ultra-high resolution. With this new groundbreaking solution, professional crews can now perform higher quality reports, reconstructions and inspections in less time and with minimal pilot training. 3D Scan builds on over a decade of research in autonomous flight to deliver a first-of-its-kind solution that will usher in a new era of autonomous aerial photogrammetry capture. 3D Scan is available for Skydio 2 today, with availability for Skydio X2 coming soon. You can read our press release here.

For the past three months we have been teasing what 3D Scan is capable of doing with our Sneak Peek blog series, which has produced some amazing 3D models, gathering the attention from customers, influencers and media, as you can see from this DroneDj article.

But enough teasing! To celebrate the official arrival of 3D Scan, and treat you to something really special, today at 9 am PT Adam Bry, CEO of Skydio, will host our largest and most ambitious event ever, broadcasting from the US Space and Rocket Center. If you haven’t already, register for the event now to watch 3D Scan in full display as it operates right next to the Saturn V rocket that took our astronauts to the moon over 50 years ago. This event is made possible thanks to our launch sponsors, and we thank them for their support: Axon, Bentley Systems, CapturingReality, Cesium , Consortiq , DroneDeploy, Sketchfab, and Sundt Construction.

The world is three dimensional. Data capture should be too.

Many professional applications for drones today are centered around capturing, analyzing, and creating digital copies of the physical world, for example to spot damage, perform measurements, create 3D reality models and so on. To generate the type of large datasets necessary to thoroughly document complex physical assets, manual drone operators must deal with two sub-optimal methods, each with critical tradeoffs.

A first common option is using rudimentary waypoint-based 2D flight patterns, which provide some level of automation, but struggle to capture vertical or overhung surfaces due to their limited top-down viewpoints. At the end of the day, our world is three dimensional, and if we want to reconstruct it, we need to treat it as such.

A second option is manually flying around the structure with joysticks to capture straight-on photos. While this method somewhat increases the level of detail, it also means that the pilot is relying on guess-as-you-go manual flight patterns, which requires maintaining long standoff distances from the subjects to avoid collisions. Anybody who has attempted this process before will attest to how difficult it is to ensure full coverage without taking a ridiculous number of redundant photos. The result is an inefficient and high-risk process for even the most skilled pilots, with lengthier photogrammetry processing times due to spotty coverage of the structure, and inconsistent ground sampling distance that leads to lesser model quality.

There’s no way that drones can scale to serve professional requirements with this kind of pain and friction. A new solution is required to both automate the data capture process and capture the three dimensional nature of the physical world.

Skydio 3D Scan builds on top of the Skydio Autonomy™ flight engine, using groundbreaking AI to enable Skydio drones to automate the flight patterns required to generate photosets that capture every surface and angle of complex structures, and that are necessary to generate highly detailed digital twins. This means that professional drone operators of all skill levels can now perform higher quality area mappings, physical asset inspections, and crime or crash scene reconstructions in record time and with minimal training.

To understand how these type of results are possible, let’s explore the core capabilities that make 3D Scan one of a kind:

Thanks to cutting-edge AI, Skydio 3D Scan makes sure you get up-close imagery with full coverage of the structure, so that whether you need a set of nicely-indexed photos or a full-blown 3D model, you have all the right data by the time you land. Even the world’s best drone pilot would be hard-pressed to get the kind of data you can get with 3D Scan.

Accelerate inspection jobs by up to 75%

Inspectors use 3D models to assess the state of electrical transmission towers, bridges, or cell towers. Construction workers use indexed photo sets to generate progress reports of construction sites. First responders use detailed imagery for evidentiary purposes as they document and reconstruct crime and crash scenes. Soldiers capture aerial intelligence to conduct timely and accurate post blast analysis while keeping them away from risk. Skydio 3D Scan makes photographic data capture in all these use cases radically simpler, faster and more accurate.

3D Scan is ready for prime time after months of early access testing by leading organizations, including Sundt Construction, North Carolina Department of Transportation, and the Boston Police Department. As testament to the tremendous value of the product, our early access participants have reported up to 75% faster data capture, 50% greater inspection team output, and 30% lower re-inspection rates.

The impact, however, goes way beyond these numbers. Sundt Construction, which is using Skydio drones equipped with 3D Scan to inspect high-pressure, high-temperature systems, is protecting its workforce, who previously had to personally conduct these inspections, without compromising on job quality.

At Sundt we inspect high-pressure, high-temperature systems. When you use a drone for these inspections, you’re not reducing an injury, you’re reducing a death. A drone is around $1,000, but a human life is priceless.

Now consider Boston PD, which is testing 3D Scan as a way to optimize the process of evidence collection after a car crash. The purpose of reconstructing 3D models for public safety is to provide accurate spatial references for images that are captured in 2D. These models make it possible to determine where people and objects were in physical space – and how their positions, directions and speeds changed as the incident under investigation progressed. However, this process, with traditional methods based on simple photographs and tape measurements, can be quite lengthy, and manual drones cannot be trusted to fly up close to these kinds of scenes, which hurts data accuracy. The image below is courtesy of Live Boston 617. 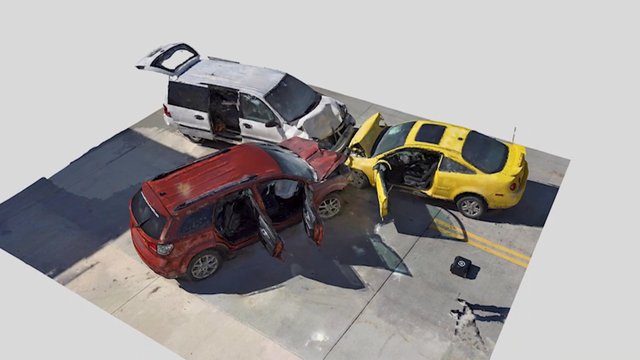 When the Skydio X2 color variant becomes available, you will be able to leverage 3D Scan on its single sensor payload that is optimized for mapping and close-up inspections, which makes it ideal for 3D Scan jobs. Skydio Cloud will allow you to sync and manage your 3D Scan models, so that you can share them more easily across your organization. As our newest partner for photogrammetry, Bentley provides high-quality processing for 3D Scan reconstructions. And if you are a first responder, you will soon be able to sync your 3D Scan datasets directly into Axon Evidence thanks to our ongoing partnership with Axon.

As you see, we have big plans and we are just getting started. If you want to see more amazing Skydio 3D Scan models, visit our new Gallery page. And if you are ready to propel your program to the era of autonomous drone inspection, please contact us and we will be happy to assist you.